Every time I drive South Buffalo Road near my home, I pass by a completely dry creek bed. The width and depth of the creek bed is evidence that a fairly big creek once ran through here. The deep channel, cut by hundreds of thousands of gallons of water passing through each day, eroded the soil and exposed the rocks left behind.

Along this same road I also noticed several large, circular depressions, which I learned are sinkholes. The sinkhole pictured below is only about 12 feet deep, but since I became aware that our area is filled with sinkholes, I have seen some much deeper. Sometimes their true depth is not known because the “bottom” is obscured by vines and tree limbs.

This sinkhole, in  the middle of a grassy field, was formed a long time ago because the trees grew out of the hole once the area could no longer be mowed.

I did some research and found out that sink holes and “disappearing creeks” have a connection. The Ridge and Valley Province of the Blue Ridge where we live has a type of topography known as “karst.” Karst terrain is characterized by springs, caves, sinkholes, disappearing streams, and a unique hydrogeology that results in highly productive aquifers.

Karst terrain is largely supported by rocks such as limestone or dolomite that are highly porous and broken down by water. As water from streams or rainfall dissolves the bedrock, fractures occur. Over time, these fractures are enlarged and an underground drainage system begins to develop, allowing more and more water to pass through the system. Eventually, large hollow areas can be carved out underground and these unstable areas become vulnerable to earthquakes, construction, groundwater pumping, hurricanes, or other forces, which can cause cave-ins, or sink holes.

How a karst sinkhole is formed. Illustration by Denise Dahn (www.dahndesign.com/denises-blog/) for an interpretive sign at the Tongass National Forest in Alaska. 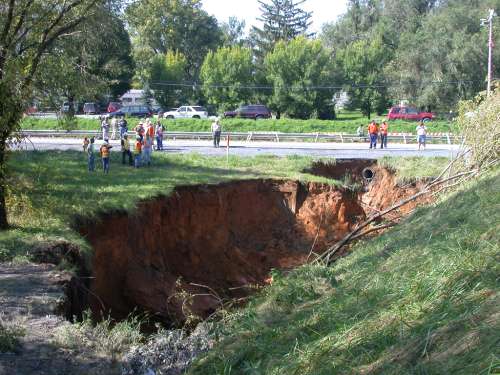 This sinkhole in Frederick, MD opened up in 2003. Many sinkholes occur along highways where rainwater runoff is concentrated into storm drains and ditches increasing the rate of sinkhole development (note the sewer drain pipe beneath roadway). Photo by U.S. Geological Survey.

Streams that begin as runoff from mountain slopes often disappear into the subsurface when the water comes into contact with karst bedrock. These disappearing streams are called “sinking streams.” The water flows underground, emerging as a spring somewhere along the valley floor, sometimes miles away from where it plunged underground.

What all this means is that the creek I saw didn’t dry up – it’s what’s called a “sinking stream.” At some point along its course, the creek dropped through a fissure in the underlying rock and now flows underground. Because much of a karst watershed can be hidden underground, it’s hard to track exactly where water comes from and where it goes. I’m fascinated by the karst topography of the Blue Ridge, which means another post on this subject sometime in the future.

With so much rain, everything is growing at an incredible rate and new wildflowers are popping up every day. Just yesterday, I noticed Ox-Eye Daisies in the fields and Fire Pinks and Goatsbeard along the roadsides. Fleabane, a member of the aster family that tends to grow prodigiously in Virginia, is probably the most common wildflower in bloom now. 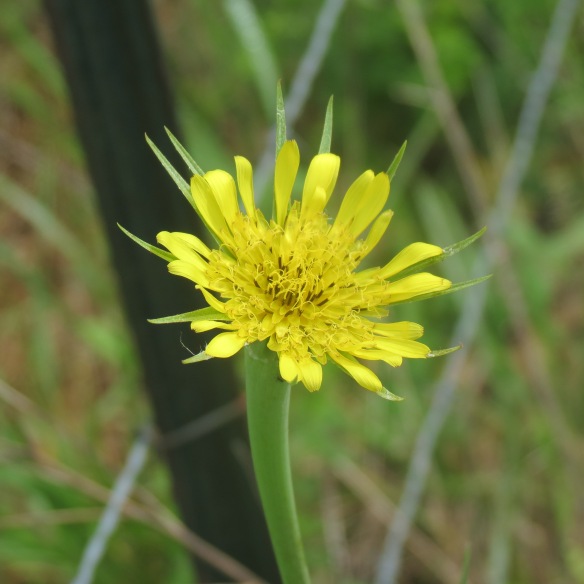 We’re really trying to get our garden and orchard going this year, sometimes working in the mud because of all the rain. I’ve been busy adding perennials to the rock garden I started last year and found this little salamander hiding under one of the plants. I tried to identify him, but there are just too many salamanders in Virginia. Does anyone have any idea what species this guy might belong to?

We also have what I believe to be a Little Brown Bat roosting in our porch rafters. I was surprised to learn that while most bats hibernate in large colonies during the winter, they may remain solitary the rest of the year, roosting in trees as well as man-made structures. I hope this one gobbles up lots of insects!

Each year, the same birds (or their offspring) return to raise another generation and there are nests everywhere. Bluebirds and phoebes have nests in the porch rafters and are busy making dozens of food runs everyday. Crazy wrens will nest anywhere: a pair is raising its young in the log splitter! My next post will probably be an update on the nesting birds.

My husband and I moved to our small farm in southwest Virginia in 2011. We decided to let the fields grow up to create a more diverse habitat for the wildlife that was already living here before we came along. We share our land with three dogs, four hens, and a couple hundred thousand honey bees, and try to live in peace with wildlife as much as we can.