All last summer and fall, we saw a lot of deer on the farm. One doe and her two fawns showed up almost every day. They would bed down in the tall grass at night, forage in the woods and farm fields during the day, and return at dusk. We did have a scare when a family of coyotes came through the area, but our three deer friends were okay (read about it here).

I haven’t seen any deer on the farm since hunting season ended. I’ve seen scat and signs of deer browsing, but nothing that would tell about their numbers. Deer hunting is a big part of the rural culture in Rockbridge County and I saw lots of hunters during deer season. I was a little worried that many of the deer would not be back this year.

We’re always on the lookout for animal tracks on our walks – that would give us an indication of how many deer were around – but the ground has been too hard. Then two nights ago, we got a ton of rain followed by an extraordinarily warm day – perfect conditions to check for deer tracks, and I set out to have a look. The first muddy spot I came to had several prints and as I walked, I was amazed at how many deer tracks I saw. They were literally everywhere! 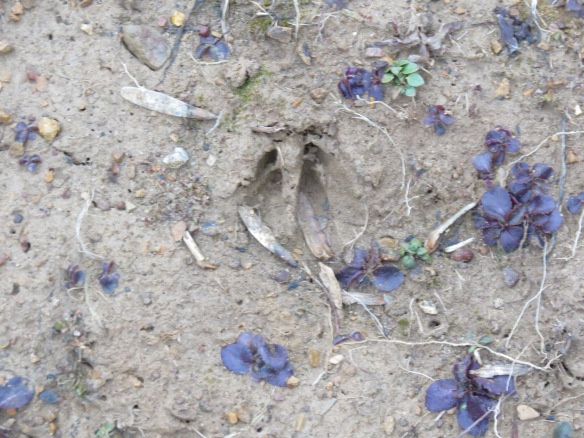 Many of the tracks were found along the same paths we take on our walks around the farm. Seems that the wildlife uses our footpaths, too! 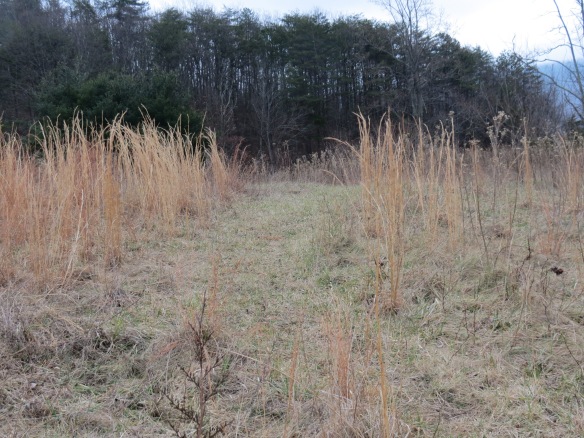 I came back feeling really good about all the evidence of deer activity. I know that deer numbers have to be controlled because of vehicle collisions and the ecological impact of too many deer, but we love having them around. My husband and I decided when we bought the farm that our homestead would be a place that would welcome wildlife.

Looks like my wish to have the deer back this year has been granted.

“Never lose an opportunity of seeing anything beautiful, for beauty is God’s handwriting.” —Ralph Waldo Emerson

A couple of days ago, we had our first snow of the season. The precipitation started as an icy mix, but quickly changed over to snow. Activity at the bird feeders had been high all morning so I knew the storm was coming. Birds have a special middle-ear receptor called the Vitali organ, which can sense even small changes in barometric pressure. By the time snow began falling, dozens of birds had converged on the feeders.

A Yellow-bellied sapsucker, a bird I saw quite a bit last year, but not so far this year, showed up at the suet feeder – I guess his natural food sources had been adequate until now, but the snowstorm had pushed him to come to the feeder.

The feeding continued heavily throughout the day as multitudes of birds jockeyed for position at the feeders or waited below to gobble up whatever fell to the ground. It was fascinating to watch the pecking order in action as bigger birds dominated smaller birds, males dominated females, and females dominated younger birds.

Still, it was clear that two Northern blue jays were at the top of the pecking order, at least for the time being. They chased off other birds and grabbed chunks of suet and sunflower seeds, eating them on a nearby branch or flying off to cache them. 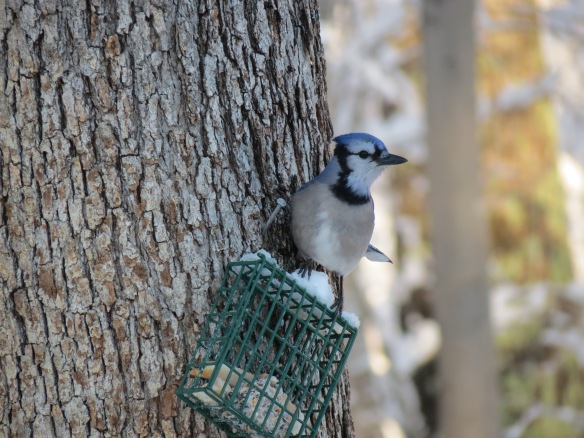 Cardinals are often the last birds I hear at dusk after the other birds have gone up to roost, their lonely chip calls piercing the quiet of the evening. By now, the other birds were gone, but this solitary male stayed until darkness forced him to leave.

Moments later, all the birds were gone. Not a sound could be heard and the only movement was the softly falling snow.

Each moment of the year has its own beauty, a picture which was never before and shall never be seen again.
~ Ralph Waldo Emerson